Home » Uncategorized » “The Blue Paper” No. 302 | Men Withering Away for Fear 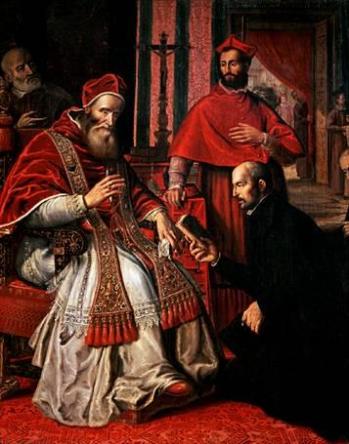 “There shall be signs in the sun, and in the moon, and in the stars; and upon the earth distress of all nations, by reason of the confusion of the roaring of the sea and of the waves: men withering away for fear and expectation of what shall come upon the whole world” (Lk. XXI, 25–26).

Up to the papacy of Pius XII, the Society of Jesus was for centuries regarded, not only by Catholics but also by the enemies of the Church, as one of the most authentic expressions of Catholicism and as THE great defender of the Church of Rome. But when the reforms were carried out under the guidance of the Second Vatican Council, the Jesuits were behind lethal changes which transformed the ranks of the professional Roman clergy. This is critical in today’s drama, wherein both Church and World affairs “by reason of confusion” are playing out a horrible tragedy: the Society of Jesus and the betrayal both of Rome and the Society’s own Constitution: the betrayal, that is, of the essential ROMAN (Romanitas) element of Catholic Tradition.

From their foundation the Jesuits were remarkable for their speculative theology and for their missionary zeal throughout the whole world—leading in education, and battling to oppose the Liberal State with the splendor of doctrine and creativity. It all renders the well-known Society one of the most imposing phenomena in religious history.

It took time for the effects of the revolutionary innovations in theology and morals, inspired primarily by Jesuits through the 1950’s and 60’s, to become widely visible—one among them being the appearance of Liberation Theology, which means to liberate “Man” from God, so that the future might be liberated from the past, and the New Theology might be emancipated from the Traditional Theology, which was till then defined by Dogmas.

Needless to say, a few among the ranks of the Jesuits were able to see that “a coup d’etat is taking place,” after the post-Conciliar reforms Indeed, owing to their strict obedience, some fellow members, and the faithful, had no alternative but to go along with those changes, to such an extent that Modern Jesuits “wrenched the Society of Jesus from under us and turned [it] into some monstrous entity under the guise of good goals” (quoted in Malachi Martin, The Jesuits, pp. 13–14).

Certainly, the leadership of the Order had slowly implemented those novelties in the name of the Council. It was a simple matter to place men of like mind in charge of the organs of communication and authority within their Association. Roman Power was the reason for the change because power flows along with two fundamental and concrete issues—authority and purpose of it.

The master stroke of the Modernist Reformation has been to impose, in obedience to the directives given by Vatican II, the interpretations (Hermeneutic of Continuity) of the reforms inflicted upon religious congregations. As it was intended thereafter to adapt doctrine and government within the Society of Jesus to the modern world, so was it also with other religious Congregations, in spite of the betrayal of the by-laws of their Founders which this entailed. Thus it is today, in regards to the betrayal within and without Traditional Groups for opposing the errors and the Modernist interpretations of the Council, to the detriment of the Deposit of the Faith entrusted to Tradition as a source of Revelation, in the way defined by the Council of Trent.

Throughout history, the Church had endured the ups and downs of Jesuitism from its foundation until our times. For instance, in 1541 St. Ignatius was elected as Superior General by unanimous vote, as was the Belgian Charles de Novelle in 1682. However, the way of election for their Superior General was changed in 1946 when Jesuits gathered together on occasion of their 29th General Congregation. Up till then, in order to be a voting member it was required to be a professed Jesuit—i.e. a religious who, in addition to the three vows of poverty, chastity (celibacy) and obedience, has taken the fourth vow of special obedience to the Pope.

In this perspective, one can read in the Formula of the Institute as follows:

“All who make profession in this Society should understand at the time, and furthermore keep in mind as long as they live, that this entire Society and the individual members who make their profession in it are campaigning for God under faithful obedience to His Holiness, Pope Paul III, and his successors in the Roman pontificate….

“We are to be obligated by a special vow to carry out whatever the present and future Roman Pontiffs may order that pertains to the progress of souls and the propagation of the faith.”

Hence, the function of the Pope has been that of the ultimate Superior of the Society of Jesus. In other words, it was a legal entity imbued with the ROMAN MIND. Even after its forty-one years of suppression from 1773 to 1814, they put their original rules in accord with the Roman element back into action.

Jesuitism endured another trial among their ranks at the time of Pius IX, when their members confronted the pest of the Modernist mentality. It was defended by many of them, who were trying to reach the truth, they said! As a matter of fact, some Jesuits became Modernists; then they were put out of the Society, and excommunicated from the Church. This was the case of Fr. George Tyrrell: he was expelled from the Society in 1906, and excommunicated in 1907 (Partisans of Error, Michael Davies, p. 38). Nevertheless, the Jesuits had a very important role to play, not only in the development of the definition of the Dogma of the Immaculate Conception in 1854, but also during the First Vatican Council in 1870 with the pronunciation of the Dogma concerning the Infallibility of the Roman Pontiff.

On the contrary, after WWII Pope Pius XII had to intervene in 1957 in order to point out doctrinal and moral deviations within the Jesuit mind and demeanor. He said, “If Jesuits were not faithful to the substantials of their rules, if they behave in any other way, the Society as the Church and numerous Pontiffs in the past approved of it would cease to be.” The Pope and the Jesuits differed in what they thought Jesuitism should be. Although most did not know why this should be so, all still were, and wanted to remain, Jesuits; yet the progressive faction shaped a new mold for the Society.

By the time of John XXIII, the modern Jesuits emerged in different fields, like Fr. Arthur McGovern, a sociopolitical scientist, well known for his book Marxism: An American Christian Perspective. Also, Fr. James Carney was famous for his practical “dialectical conflict” which brought him to enroll himself as Commander of the guerrillas in Honduras: soon after he was put to death by the Honduran Army. Furthermore, Fr. Karl Rahner was a celebrity for his sarcastic criticism of the Papacy and Roman authority, in reference to what the Church had defined as basic and obligatory, which for him was optional and questionable. Without doubt, by the 1960’s he had portrayed a new Jesuit attitude with his book Unity of the Churches: An Actual Possibility, filled with the idealism of Immanuel Kant.

Among other personalities, there were Pierre Teilhard de Chardin, with his Cosmic Christ, and Hans Urs von Balthasar, known for his book Apocalypse of the General Soul, who founded the mixed Community of Saint John in 1940 with Adriene von Speyr. Then he decided to resign as Jesuit; from the beginning, he was bad news! Even worse was Henri de Lubac, French Jesuit from Lyon, with his book Meditations sur l’Eglise, and who with Jean Danielou wrought the Documents of Lumen Gentium and Gaudium et Spes during the Vatican II Council. Augustine Cardinal Bea (born of a Jewish mother), as Jesuit, used to do the Spiritual Exercises of St. Ignatius every year: in the 1960’s he declared in an interview that “in order to destroy an enemy, one must know it from the inside out, and there is no a better way to know the Catholic Church than the Spiritual Exercises.” He promoted and inspired the Document on Religious Liberty and the Document Nostra Aetate concerning the relations between Catholic and Jews, and was a member of the B’nai B’rith Lodge. Lastly, the Peruvian priest Gustavo Gutiérrez endorsed his ideology and framed it in the structure of Liberation Theology, which preaches the New Humanity for the people of God based on the struggle of social classes. These personalities, with their own theories, were supported by Fr. Pedro Arrupe (Superior General), who used to be called the “black Pope” during the Second Vatican Council. He curiously suffered a stroke on August 7th, 1981, three months after the assassination attempt perpetrated against John Paul II on May 13th: after ten years of illness he died in Rome.

Unfortunately, Pope Francis (another Jesuit) is deeply immersed in such innovations from and following the Second Vatican Council. He is its genuine product—a Modernist Pope, who is working to break the Roman Element in the Catholic Church with his New Evangelization Program, which pretends to impose “the” Magisterium of Vatican II as dogmatic and irrevocable.

Let us read some words from Archbishop Lefebvre:

“Romanitas is not a vain word. The Latin language is an important example. It has brought the expression of the Faith and of Catholic worship to the ends of the world. And the converted people were proud to sing their Faith in this language, a real symbol of the unity of the Catholic Faith.

“Schisms and heresies are often begun by a rupture with Romanitas, a rupture with the Roman liturgy, with Latin, with the theology of the Latin, and Roman Fathers and theologians….

“It is this force of the Catholic Faith rooted in Romanitas that Freemasonry wished to eliminate by occupying the pontifical States and enclosing Catholic Rome in Vatican City. This occupation of Rome by the Masons permitted infiltration of the Church by Modernism and the destruction of Catholic Rome by Modernist clergy and Popes who hasten to destroy every vestige of Romanitas….

“This relentlessness against Romanitas is an infallible sign of rupture with the Catholic Faith that he [the Pope] no longer defends” (Spiritual Journey, p. 77–78).

Consequently, we can see that the Jesuits still have an imperative role in today’s crisis within the Church. They were screened by the PRELATURE OF THE HOLY CROSS, popularly known as Opus Dei; they are, however, back at the command of the Church’s affairs—but with a revolutionary attitude “by reason of confusion” which is not according to the Gospel of Jesus Christ. “He that reads, let him understand” (Mt. XXIV, 15).